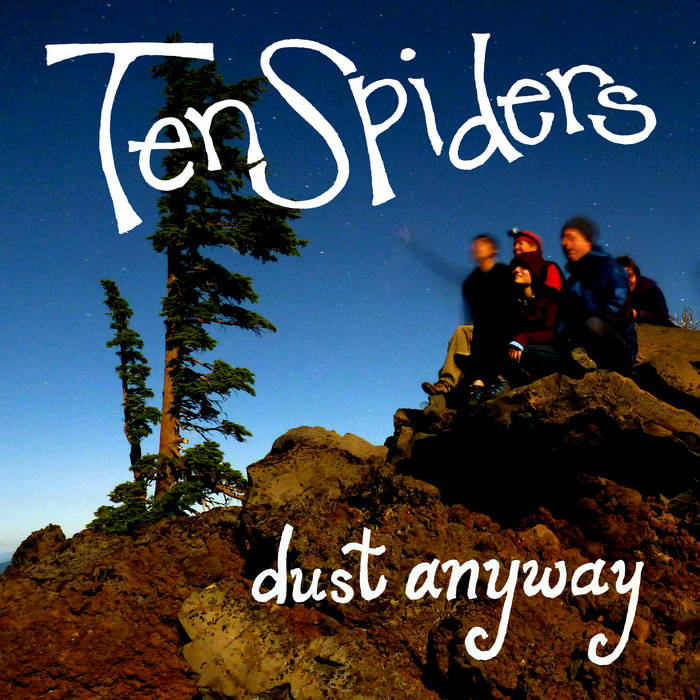 Ten Spiders is based on the stolen land of the Multnomah and Chinook people, in what is today called Portland, Oregon.

Big thanks to Justin Phelps who recorded, engineered, and mastered this record bringing out the best in us along the way. We couldn’t have made this record without John Gannon, who recorded drums for 7 hours straight the first day we went in the studio. Any song you hear with him drumming on it is from that day. Thanks also to our guest stars Mary Sue Tobin, Michele McAffee, Heather Keller, Pat Bohan, Terran Inman, and again John Gannon (on the horns, too!). Bob and Rachel Harris and their friend, Gail and Robin Freidman, and Suzanne and Matt Dixon helped us tweak the final mixes and order the songs.

As we recorded these songs, the next version of Ten Spiders emerged. You can pretty much hear what that sounds like on Tracks 1, 3, 5, 11, and 12. We’re excited to see where we will go musically and literally with Harrison Games and Amos Hart! So grateful for them and the fun we have.

Ten Spiders was an acoustic trio in Philly and grew into a regional roots rock jam band in the late 90s and early 00s. Over a decade, they played over 800 gigs in 10 different states. They appeared live on community TV and radio, including in NYC.

Now located in Portland Oregon, they're entertain people along the West Coast. ... more

Bandcamp Daily  your guide to the world of Bandcamp

Featured sounds by K.Spark and WIZDUMB, plus Basi joins the show to discuss his latest release.