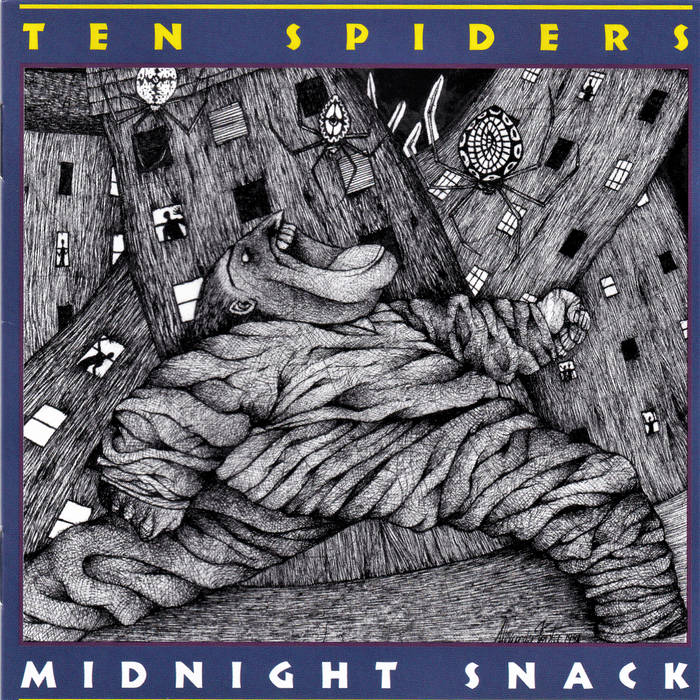 Ten Spiders was an acoustic trio in Philly and grew into a regional roots rock jam band in the late 90s and early 00s. Over a decade, they played over 800 gigs in 10 different states. They appeared live on community TV and radio, including in NYC.

Now located in Portland Oregon, they're entertain people along the West Coast. ... more

well, my friend
you seem found and I seem lost
I'll give you an answer if you pay the cost
in this land you don't get nothing unless you ask
and when you give your love
sometimes, you'll get it back

and the days wear on and I've no time to spare
I know the price of life is death
I'm in the dragons lair don't slow me down
Still we talked of you just the other night
with a vague sensation
things would never be right
still I won’t let my ghosts brings me down
I won’t ever let them catch me frown.
Track Name: Change in the Night
We could waste our time together
I could make things pretty for you
But let’s be free from a lie’s tether
‘cause there’s more beauty in truth
What things change in the night
when I ask the moon to rain
Look inside not in the sky
I am not the earth
Which of us can sense their homeland
in the blood of a sunset sky
History slips through holes in our hands
we never know when to ask why
Track Name: Bottle of Wine
It’s no friend of yours or mine
It’s just the sands of time spilling
It’s just me and this bottle of wine
and it’s just time that we’re killing
Well, you get a few years behind you
I know it’s easy to put things off
Time comes and finds you, yeah
you’re still alive but something’s gone

Life’s a parade of sorrow and joy
takes people's lives turns them inside out
People worry a little
‘cause you march to your own drum
trying to figure out
what the hell your life’s about
I think the best thing
that we can be expected to do
Is to live each day for the day
Leave the past behind where it belongs
Don’t worry about the choices you’ve made
Track Name: All I Want
Hearing older people, I’m hearing them say
what is wrong with the kids today
we gave them everything
it all went their way
that wasn’t how it was back in my day
perhaps it's all the violence on the TV
perhaps we should’ve stayed up in the trees
maybe it’s only that nobody cares
maybe it’s only that nobody dares
Getting up at seven, I’m a-dragging myself along
hear the chaing rattlin’ their slavery song
all the magic moments
we’re caught in between
all the magic moments, ignored unseen
it’s never written in the paper
never taught in school
I see myself a laughing, crying fool
whipping every moment, I’m making it cry
bottling the tears, they never tell you why
Track Name: Needles Unseen
I think it's fair to strive
for more than just money in your life
sometimes I wonder if I live
how will I survive?
I know in my mind
my own worst enemy there lurks
I sleep a little bit easier
for me I got a system that works

Benjamin, what a sin
you caved in a you towed the line
everybody’s gotta make their own choices but you took dust for the diamond
Track Name: In the Image
I was absently moving my hands
when I looked down to find
they were intertwining black with white
and day with night
creating a universe in real life
twisting and bending it
rearranging it and stretching it
in the image of my own nightmare

And every building that you enter
every bridge that you use
is an unwritten agreement
between nature and you
saying nature, you hold this structure up
while my body passes through

I was dancing in a huge arena
I was losing track of my thoughts
pondering the trusses
and the engineers I never trusted
and in my mind
the walls were caving in on us
bodies were twisted and bent
rearranged and stretched
in the image of my own nightmare
Track Name: Never Good Enough
Well I hope I didn’t make a fool of myself last night
You know I open my mouth and I never know what might
Roll over my tongue and through my teeth
I’m never good enough
for the company I keep

I was out drinking
with a friend of mine last night
We were having a good time
‘til I started a fight
And in my mind, you know,
there was no doubt
Now I can’t even remember
what I was fighting about

So, I hope I didn’t make a fool of myself last night
You know I open my mouth and I never know what might
Roll over my tongue and through my teeth
I’m never good enough
for the company I keep

Well, I hope I didn't make a fool of myself that night
You know I open my mouth and I never know what might
Roll over my tongue and through my teeth
I’m never good enough
for the company I keep

Well I hope I didn’t make a fool of myself tonight
You know I open my mouth and I never know what might
Roll over my tongue and through my teeth
I’m never good enough
for the company I keep
Track Name: Copilot
Now you’re my copilot of life
through the cold and violent
changes and arrangements that I see
and life with you is like a
white christmas, like the flight of Icarus
being in a riot, right there in the thick of it
the thick of it, thin and thick of it
thick of it, not missing a trick of it

Now you’re my copilot of life
through the cold and violent
you’re my copilot of life
and I chose you and you chose me
now we’re together for all eternity
Track Name: From This Day On
she said
when you lose everything worth having
it's like a waterfall, inside your head
I never thought I was the losing kind
now my life is upside down
when can i rest

everything looks different in the morning
seeing beauty from the inside out
the birds sing and the sun shines
still I don't know what it's about
I want to spit out this bitter pill
I never knew anything
could make me this ill
and I’ll never be the same from this day on
Track Name: America, the Dangerous
Written by Maria Rossi Cahill

ask the trees how it used to be yesterday
ask the stream if it's flowing the Same way
ask your God if you face the truth
all the way
then I’ll ask you, what have we got today?
Track Name: In Case You Can't Tell
I’m all right in case you can’t tell
sometimes I hear the tollin’ of the bell

I was looking for a place to rent
no one wants 2 kids that spend
all their time playing guitar
trying to be rock and roll stars
Now the house we got was none too sweet
fallin’ around my feet
and the landlord givin’ me a sly smile,
amazin’ what a coat of paint will hide

Bandcamp Daily  your guide to the world of Bandcamp